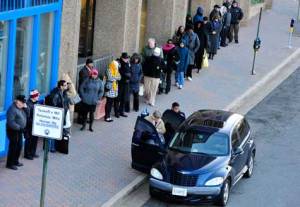 A few weeks ago while visiting our friends over at the DC Women’s Business Center, I noticed an interesting phenomenon. There were people randomly lined up in unmarked areas of downtown Washington DC standing calmly in lines, just waiting. Since I’m a curious creature, I decided to pay close attention to how this whole ordeal was going down. So, really, people – dressed in various types of clothing and of different ethnicity’s, ages, sex and stature, wait in line for unmarked cars to pull up to the curb. There is a really quick exchange of words (which I could not inconspicuously decode), the person gets into the car and they roll away. After a bit of post observation research, I learned that this practice is simply referred to as slugging.

Slugging is a term used to describe a unique form of commuting found in the Washington, DC area sometimes referred to as “Instant Carpooling” or “Casual Carpooling”. It’s unique because people commuting into the city stop to pickup other passengers even though they are total strangers! However, slugging is a very organized system with its own set of rules, proper etiquette, and specific pickup and drop-off locations. It has thousands of vehicles at its disposal, moves thousands of commuters daily, and the best part, it’s FREE! Not only is it free, but it gets people to and from work faster than the typical bus, metro, or train. http://www.slug-lines.com/

Now, I don’t know about you, but the thought of getting into a random car with a random person sounds real Michael Myers-like, but that’s not the point here. The point is how this random, self-organized, unconventional method of travel has taken on a movement of its own and has even embraced a standard of etiquette rules and protocol to ensure its livelihood.

The concept of slugging made me think about all of the other unconventional things that we have embraced and built a set of standards, rules, processes or protocol around it without really realizing. You might casually think of Man Code, as men simply respecting an unspoken set of standards that men live by. You may think of Buying a Round of drinks after your friend just initiated a round a short while ago, to simply keep the party going. You may even Provide Socks to friends who are coming over your house when you request for them to remove their shoes.

Scarlet Says…Whether it is a deep-rooted commonly utilized practice like Thank You Cards or a newer passive practice like Man Code, etiquette and protocol has its place in every aspect of our lives. It exists not to impart stiff, boring and antiquated practices into our day, but instead to be guidance in maximizing our relationships and our time. Take advantage of it!

Did You Know? – The Power of Repitition

In order to commit something to memory, you should repeat it 15 to 20 times.

Did You Know? – Buying A Round

The practice of every member of the group taking a turn buying a round is standard British pub etiquette. Anyone not partaking is silently deemed a “cheapo”. Americans, however, don’t operate like this (continuously) and tend to take care of themselves at the bar. Fair enough, but this kind of conduct will usually upset any Brit in their party.

Free Clones For The Holiday!

It’s coming and you’ll be tempted. You are about to be hit with an onslaught of holiday party invitations. As much as you want to and initially feel like you will be able to, you probably can NOT attend them all. You’ll probably map out a party hopping plan and maybe even resort to constructing a spreadsheet that makes it all look like it makes sense.

Consider this. Ask yourself these questions as you consider which holiday parties you really need to attend? What is the goal of attending this event? Am I going simply to take advantage of the free booze and food? (which are probably the same types of food and booze at the last party that I was at) Will I build any new relationships by attending? Am I taking time away from the people who actually mean more to me and who I really want to spend time with? Most importantly, was I even invited to this event?

Scarlet Says…Holiday parties are an awesome time to fellowship, network or simply celebrate the year’s business successes. As much as you want to divide your time and your priorities into a million different pieces, over committing to events will consume and frustrate you and leave you not having meaningful experiences, but instead rushing aimlessly from event to event. Try making the most out of your holiday party invites by making a top 3 list of events that you are invited to. It’s OK and acceptable to tastefully send your regrets or decline an invitation. If you RSVP, do everything in your power to attend and most importantly, stay away from crashing. If you weren’t invited, the rule is simple, you don’t attend.

T’is the Season to Stay Fit!

The holidays are quickly approaching, and during this time, many of us have a hard time keeping in shape due to the many dinners, shopping trips, parties, happy hours, and yummy office treats. One can gain up to 5 to 10 pounds during this time. However, one can still enjoy all of these joyous festivities and keep those unwanted pounds off, by following a few healthy tips.

Being A Good Event Host

Being an event host takes more than an attractive outfit and a following. In order to be a good event host, you will have to be extremely personable, attentive, relaxed and flexible.  You want all of your guests to feel welcome and comfortable, which will increase their likelihood of having a great time and a return visit to your next event. Being attentive allows you to control the atmosphere and remain abreast of what’s happening at all times. Staying relaxed and maintaining a positive attitude is a must, as rarely does everything go as planned. When the unexpected occurs, you must correct the situation as quickly as possible, while maintaining a cool and serene appearance. This is also where flexibility becomes key.  As the event host, you are the first point of contact for every situation.  When there’s a need, it’s your duty to fulfill it. Accommodating your guests to the best of your ability should always be your top priority.

Byron K. Suggs, Cool Smart Inc., co-founder of Tux and Chucks. Be sure to check out Tux and Chuck’s on November 16th.